We don’t get all the reports from overseas. The literature that we send around the world doesn’t have our name on it. Like this tract here, for instance, it’s printed by Pilgrim Tract Society, and it doesn’t have our name on it anywhere. So Pilgrim Tract Society might get a testimony about how this is used, but Love Packages very seldom gets those unless our distributor gets them.

But this is a story from one of the literature distributors.

This story comes from Nepal, which is just north of India. It’s the only Hindu kingdom in the world.

This guy had 37 cows. Now, they don’t eat cows. Hindus don’t eat cows because they’re holy, but they raise cattle. This guy, this whole area, raise cattle for milk. They raise them to make cheese and yogurt and all those kinds of things. That was his livelihood.

Then, there was a disease that swept through the area and just begin to kill all the cattle. He had 20 cows that died. It’s quite devastating … Everybody’s cows are dying.

He told his wife one day, “Listen, the 17 cows I have left, they’re all sick. They’re all gonna die. I have to go to the city and see if I can find some medicine for the cows to see if we can save them. I’ll be gone for quite a few days, because [it is a] two-day journey to get to the city.”

So he took off. He got to the city and begin to ask questions—begin to ask here and there and yonder, ask this person, that person. They send him over here, send him over there. He talked to several veterinarians and everybody, no matter who he talked to, told him the same thing, “As far as we know, there is not any cure for the disease that’s sweeping through the area. All we can tell you is go home and watch your cows. They’re probably going to die.”

And so he’s walking through the marketplace just despondent—heartbroken—because his whole livelihood and everything about his life is just going down the tubes.

An Old Tract and a Murder-Suicide Plan

Walking through the marketplace, he ran into a literature distribution team for Love Packages, and they gave him a little tract, just a little four-page tract just like this. He was very polite and pleased. He took it and stuck it in his pocket, but he didn’t read it.

Went home. When he got home, he found seven more cows dead. So he spent the next day burning and burying cows, getting rid of them.

That night he was sitting on top of a hill overlooking his place. He has 10 cows left and they’re going to die. He can tell they’re sick, and he’s thinking to himself, “What am I gonna do? How am I gonna provide for my family? We’re going to starve to death. We don’t have any way to make any money.”

He came to the conclusion that the best thing for him to do was to kill his wife and to kill his children and then kill himself. He believed in reincarnation, so he thought, “Well, if I kill us, we could start over again.”

Now, we know that’s not right because the bible says, “It’s appointed unto man once to die, and then after that the judgment” (Hebrews 9:27). But they believe in reincarnation.

He was just pondering that when, all of a sudden, he felt this rustle in his pocket. He pulled out this piece of paper and he read these words, “Come unto me all you that are labored and heavy laden, and I will give you rest” (Matthew 11:28). And then he begin to read, and for the first time in his life he read about Christ.

The tract said that Jesus Christ is the all-mighty God, and that you could ask him anything. So he prayed a prayer and he said,

I don’t know anything about you. I’ve never heard your name before, but this piece of paper says that you can do anything. Almighty God, Jesus Christ, I ask you now to heal my cows. And if you’ll heal my cows, I’ll serve you with every ounce of strength that I have, with all of my life, for the rest of my days.

The next morning he got up, went outside … and his cows were well.

He went to the city and he started asking questions. “Where were the men that were giving these papers away?” People pointed him here, pointed him there, pointed him over different places. He went from place to place. Nobody knew for sure.

Finally, somebody pointed him over to a church and, there, he ran into our literature distribution team. That’s how we got the story. Then he told them and he said, “This is what’s happened.” He said, “You have to come to my village. Nobody in my village has ever heard the name of Jesus Christ. You’ve got to come, and you’ve got to tell them about this great God.”

They said, “Okay, we’ll come.” And so they traveled with him two days to his village. When they got there, he went everywhere in the village. He says, “Come, come on. You come. You come. There are people here that are going to tell us about a God who can heal cows. Come on. He can heal cows. Come on. You come on.” He went everywhere, and the whole village came out. 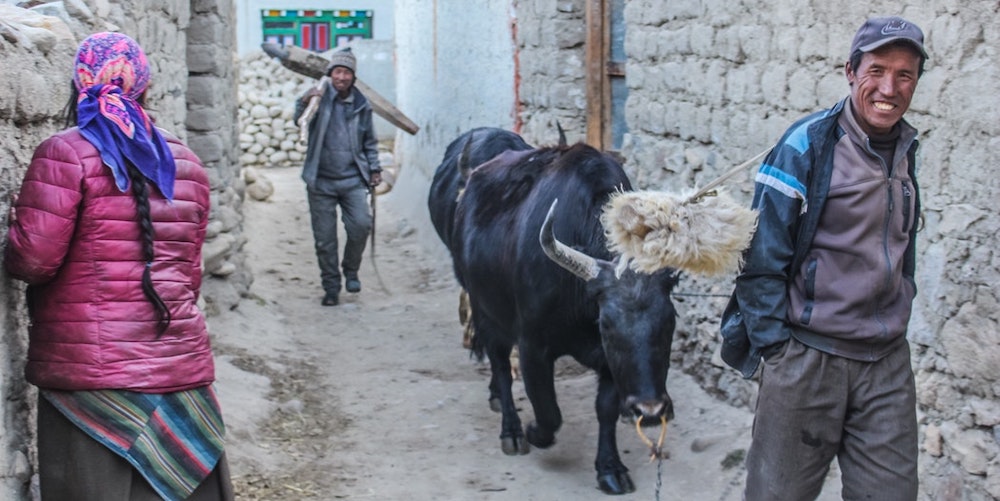 They are planting a church there—in that place where the gospel had never gone before. Why? Because of one little, tiny piece of paper that God put in the right place at the right time, to save that man and his family and the village. Amen.

What is collecting dust on your shelves and end-tables that could save lives overseas? Send us your used Christian literature or download resources to host a bible collection drive in your area.