If you are a believer, you won’t have a hard time believing this, because God has answered prayers for you—or spoke to you in the middle of the night, or made the words jump off the pages of your Bible. If you’re a skeptic, perhaps these words will encourage you to investigate the claims of Christ. If you’re a doubter, you’ll probably doubt this too. But this is my testimony and every word in it is true.

Recently I began having difficulty swallowing and began choking on my food. On Tuesday, July 16, I went to the doctor.

The first day I saw the doctor he told me that I had a tumor in my throat, that it didn’t look good, and that he would be remarkably surprised if it wasn’t cancerous. He said he had seen it hundreds and hundreds of times.

The other bad news that day was that they couldn’t operate. Well, they could operate, but because it was right on my vocal cords I would probably lose my voice. I told him, “Well, that’s not a very good thing to tell a preacher.”

From the moment he said that, I knew—I just knew—everything was going to be okay. God gave me an overwhelming peace.

And I haven’t been. 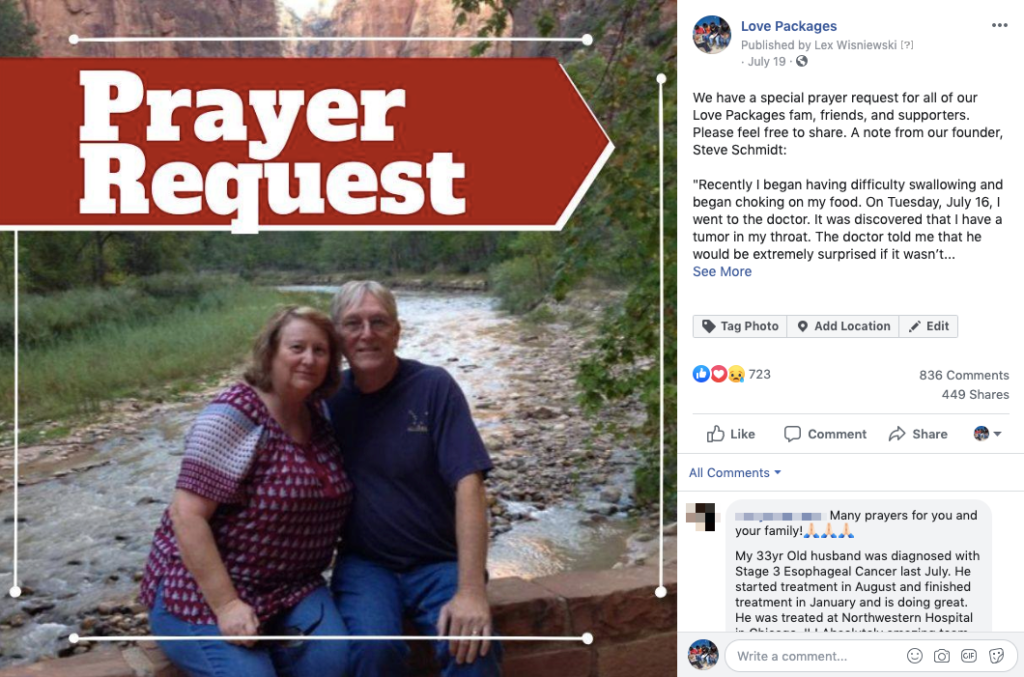 My Prayer (and Disobedience)

My prayer when I’m lying down at night has been, “Lord, I know what the reports are, (The PET scan results said that it was cancer.), but You love me. You’ve taken care of me all these years, and I don’t know what’s going to happen, but I trust You. Whatever takes place is okay with me. You’re my Lord. You’re my Savior. You’re my Redeemer, and I believe that You’re going to take care of me and do what’s right.” That’s the way I’ve been praying every night.

So, Monday morning comes around: the day I am to have the biopsy.

I got up early and was praying. 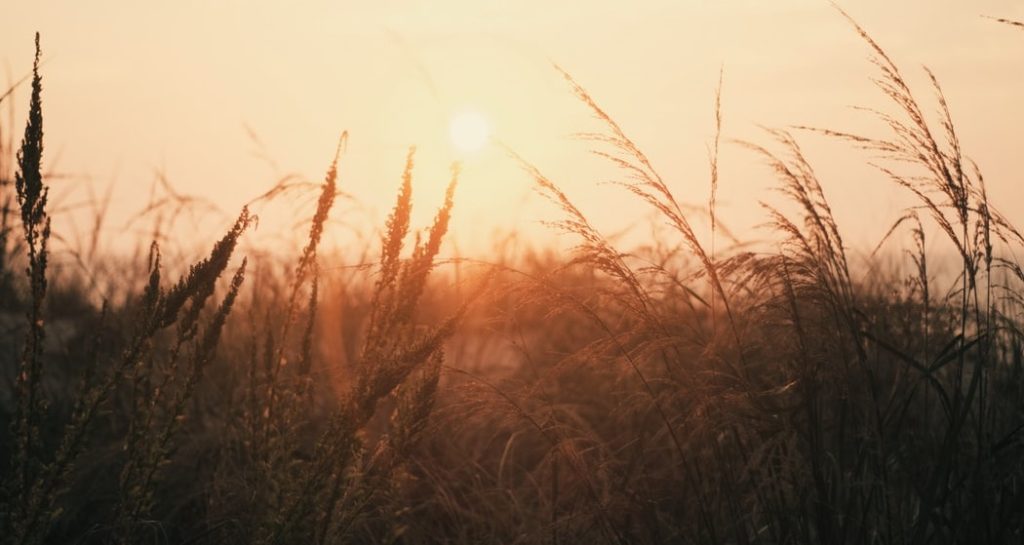 Now, five or six people had prayed over me lately and asked the Lord, “When the doctor does the biopsy, let the tumor just fall off.” So I started to pray that and I got it about halfway out of my mouth and I just … I just knew that wasn’t the right thing to pray. I didn’t know the reason why—maybe it’d be dangerous. I didn’t know why, I just knew it was the wrong way to pray.

Now, I have to confess to you, I was disobedient in this one thing: I felt like the Lord said, “I want you to write that down and give it to the doctor before he operates on you.”

Heading to the Hospital

Well, we had trouble getting going in the morning. I’d forgotten that we went out for dinner Sunday, and I had both vehicles in Hillsboro. We forgot to bring one of ‘em home. I started to pull out of the driveway and I said, “Where’s the truck? Ohhhh, we left it at Hardee’s yesterday!”

So we ran and got it at Hardee’s so that they wouldn’t tow it away. And then it rained on us, and so we didn’t get to the hospital any too early.

I told Jeanie later about writing to the doctor, and she tried to make me feel better by saying, “We didn’t see the doctor to start with anyway. He didn’t come to talk to you, so you couldn’t have given it to him anyway.” So I don’t feel so bad. I am gonna write it out and give it to him, but it would have been so much better if I’d have done what the Lord said. But … I’m not always obedient.

We got to Springfield, registered, and went in so they could do the biopsy. They took me back and got me all prepped. Jeanie kissed me, and the lady came and she said, “I’m gonna prep you for the anesthesia.” 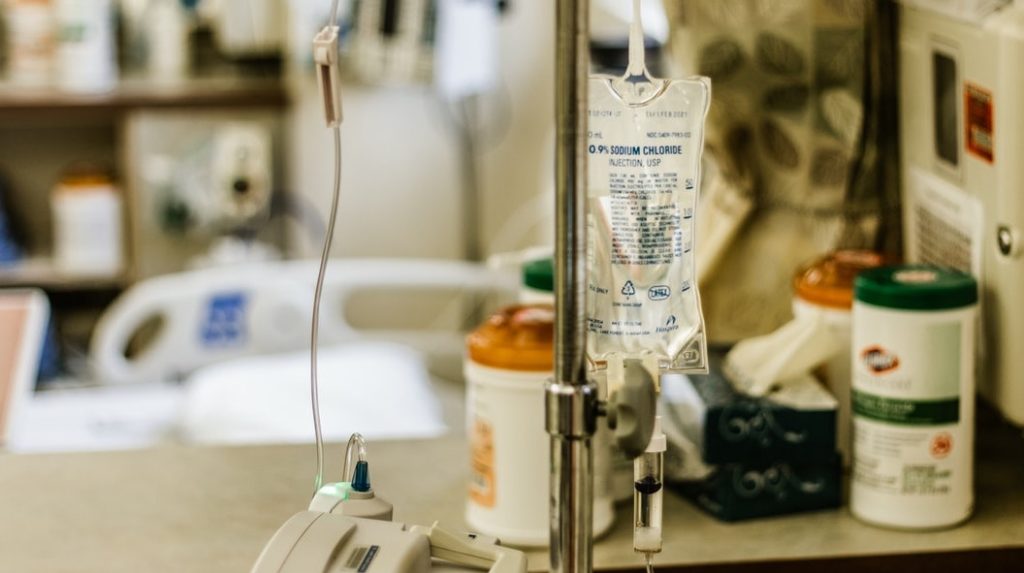 She put a shot in my tube and bonk: I was gone. I didn’t know anything after that. They put a tube down my throat so I could breathe.

The doctor went in with a camera and a thing to take just a little snip out of the tumor. They already knew it was cancer from the PET scan. Now they would get more details, because they would do a biopsy on it—really examine it, see what kind of cancer it is, and so forth and so on. But when he touched it, it moved.

Then he said, “If I’ve got your permission, we’re going to go in and take it out today.”

She said, “Well, can I ask some questions, sir.”

He said, “You ask whatever you want.”

“Well, when you operate on him, is he going to lose his voice?”

“No. Not where it’s at. I can cut right between there, and he’ll keep his voice. He probably won’t have but a sore throat.”

She said, “Well, yeah, let me call my sons.” So she called my two boys. I think she called Pastor Myron, too. She was pretty shook up, I guess. Big decision to make, you know?

She told me she wasn’t afraid, but she knows me: She knows I love to preach the Word of God, and she would never want anything to happen to me that would ruin my voice.

(She told me a couple times last night, “I sure like listening to your voice.” I said, “Depends on what I’m sayin’.”)

An Unscheduled Operation and a Testimony

The doctor told me later, “I didn’t cut any more than I absolutely needed to. I can’t say you’re one hundred percent—because you might have one cell somewhere that’s still cancerous—but I will tell you that it’s 99.9999999 percent gone.” He said, “You had one lymph node that lit up on the PET scan, so I took ten of ‘em out.”

Of course, I didn’t know any of this. I was knocked out for the fifteen-minute biopsy. They operated on me for four hours. When I woke up, it was just what I prayed for. When they told me, I said, “That’s exactly what I prayed for this morning!”

Then I was in the hospital and, of course, they gotta keep me. So they checked me in, and Jeanie left at a quarter to six. The doctor came in at six-thirty and told me all the things that I just told you.

I said, “Doc, I don’t want to take a lot of your time, but someday I want to tell you a story. For now I want to let you know that what you did today was exactly, exactly, what I prayed for.” And he just kind of looked at me like, what?

Between the time Jeanie left and the doctor came in, I had asked for a Bible. I said, “If you could get me a Bible—if you could find me a Bible somewhere—I’d like to read.” There are none in the rooms anymore. They took them all out of the rooms. They went over to the nurse’s station—none there. I said, “Well, can you find me one?”

“Yeah, we’ll find you one.” So, they looked everywhere. Finally, after a little over an hour, they found me a Bible and brought it to me. Brand new one. They put my name on the inside of it.

He revealed Himself to me. And the presence of the Lord was so thick in the room, I was overwhelmed. I learned so much. The Lord spoke to me—so much about so many things; it was so wonderful. His presence is so wonderful. That was the best part. I really serve a great God who loves me. I pray that all who read this will know Him too!

Thank You for Your Prayers

Thanks to all who prayed, called, sent cards, and supported us through all of this. We love you. Thank you Dr. Garcia for your skills and great care. You did good to us. God Bless you.